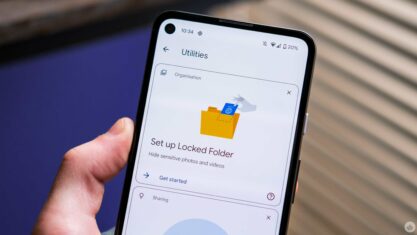 Since the summer, Google has been rolling out an update for the Google Photos app that adds a locked folder, and now it’s finally coming to even more Android phones.

When the update began to roll out last June, it started on Pixel phones, but now users with other phones have reported getting the update signifying that it’s likely rolling out to everyone. I was able to set up the feature on a OnePlus phone running the OxygenOS 12 beta, so it definitely seems likely that the update is out for all.

This folder isn’t perfect if you have multiple Android devices, but if you only have a single phone, it does an excellent job of keeping sensitive photos and videos out of the cloud and locked behind a pin code on your device. To set up a locked folder you can access it from the Utilities section within the Library page in the photos app.

It should also be noted that if you delete that Google Photos app, you’ll lose all the images you’ve locked away. This also means that if you switch to a new phone, you’ll need to transfer these photos manually. This update is also not available in the Google Photos app on iOS or the web.

The most stunning space photos of 2021

Exporting Links from Safari Reading List via Shortcuts for Mac

Here’s What We Know About Android 13 So Far